Mass Indie Film Director Jack Skyyler has done it again,This time your ship is known as a Infested Ship! Casting is still being conducted for this thriller. Check this trailer out and tell yourself if you want to be a passenger on this Infested ship. Funny and deadly things begin to happen to a group of College students producing a documentary film aboard the U.S.S Salem Ship. 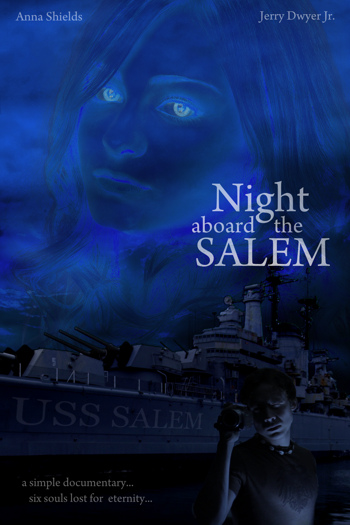 Setting/Location: The U.S.S. Salem: a decommissioned U.S. heavy gun cruiser, 717 feet long, the world’s largest all-gun heavy-cruiser.
Buzz: The Salem is an internationally recognized haunting which has been featured on numerous TV shows such as Ghost Hunters and A&E’s Ghost Story.
Synopsis: A group of paranormal investigators become trapped in the U.S.S. Salem. Inside the Salem, the worlds of ghosts and men mesh haphazardly together in a net that threatens to pull them down with it. As the origins of both the ghosts and the members of their party become clear the group begins to turn on each other; first it’s a fight for survival and finally sanity.
Videos: Short Promo: “Infested Ship” The U.S.S. Salem walk-through
Producer(s): Joe Charbanic, Jack Skyyler, Joel Brook, Alex Zinzopoulos, Glynn Praesel, & Mike Condon
Director(s): Jack Skyyler, Alex Zinzopoulos, & Joel Brook
Cinematographer: Joel Brook
Writer: Jack Skyyler
Cast: Anna Shields & Jerry Dwyer Jr. Casting…
Crew: Paul Morin & David Benedetti Staffing…